Today a friend sent me a music video, called “This is my home”. The music and lyrics were written by Hong Kong-based Canadian songwriter John Laudon, the composer for many famous canto-pop songs.

When I listened to this song, I felt very touched. The lyrics show his love for Hong Kong, which he called home.

Laudon has devoted his life to music. His father was a Christian pastor, and he started learning piano when he was 10. At 12, he started playing guitar. In 1984, he came to live in Hong Kong and formed the Citybeat band, where he was the key singer and composer and all members were expatriates.

In his early days in Hong Kong, he had lived in Sham Shui Po, a poverty stricken area. He also played music on the streets, in such places like Tsim Sha Tsui ferry pier, TST East and lounges in the hey-days of Canto-pop when Anita Mui and Leslie Cheung were the top stars.

Although he remained as an unknown street singer, he did not give up his passion for music.

His fame started in 1986 when he won in a music competition and he was spotted by a music manager. In 3 years, he had released four albums.  In 1989, he began composing cantopop songs, and the first song that landed him to success was for Alan Tam “Love of the Only Kind”《愛念》. In 1991, Citybeat was disbanded, and he focused on writing songs for Hong Kong’s top singers, including Andy Lau, Aaron Kwok, Eason Chan, and Leon Lai.

Released on 2 March, his newly composed song, “This is my home”, comes at a time when Hong Kong is going through hard times. It is uplifting and gives hope to people, while changing their perspectives of Hong Kong.

Often, people dislike Hong Kong for being so crowded, but he sees it differently. “People mountain, people sea, soaring towers and crowded streets from the harbour to the mountain peaks. This is a city truly unique,” he sings.

When people lose hope for Hong Kong’s future, he says he has lived here through the sunshine, and through hard times, “but it holds me, like a love that’s torn that will stand strong through every storm”.

I admire his passion to spread love during Hong Kong’s struggles, and I like the way he sees this city. Throughout our lives, many of us have never treated Hong Kong as our home, and are always thinking of leaving. But if we think more deeply about Hong Kong where we have lived all our life, we may start to appreciate it and give thanks to it. 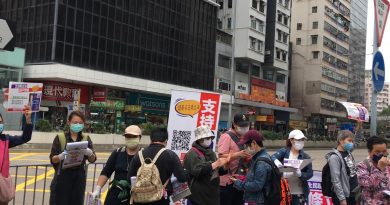